The president has in a good gesture wired 10 million shillings to the Family of the deceased boda-boda rider who recently committed suicide inside the Masaka Central Police by roasting himself with petrol.

Hussein Walugembe, a boda-boda rider on July 2 poured petrol on himself and lit a match inside a traffic office after failing to reportedly raise a bribe to get back his impounded motorcycle a Bajaj Boxer, Reg No UDL591R.

This ugly incident not only horrified the locals in Masaka but also exposed shady traffic police officers who have been silently extorting money from defiant Boda Boda riders by inflating the price of recovering impounded motorcycles.

President Museveni who was clearly touched by Walugembe’s unfortunate death reached out to his Mother identified as  According to Juliet Nanfuka on phone and expressed his grief before later wiring a fat sum in form of condolence to the family. 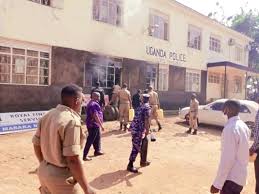 Nanfuka , the mother of the deceased, told the Daily Monitor that President Museveni called her number over the weekend to console the family and asked for her bank account number.

Meanwhile, the Police officers responsible for causing the death of the deceased, Sgt Julius Ewalu and Sgt Ibrahim Ssesanga, the acting officer in charge of traffic have been presented before the disciplinary court for action.

ASP David Manzi on Wednesday chaired a court session in which the duo is accused of taking bribes and corrupt tendencies in order for Boda Bodas to be released.

4 witnesses were presented who all accused listening to witnesses who accused the officers of abuse of office and corruption.

Anite responds: ‘The procession that has been widely viewed on social media was not a campaign rally

Museveni hits out at critics about being ‘old and weak’, reveals why he continues to accept to lead the country