Manchester United have expressed “disgust” at the racial abuse suffered by Paul Pogba following the 1-1 draw at Wolverhampton Wanderers on Monday.

The midfielder saw a second-half penalty saved, having won it with a run into the area. This was his fourth miss in 11 spot-kicks but Ole Gunnar Solskjær backed Pogba, with Marcus Rashford being United’s other taker. 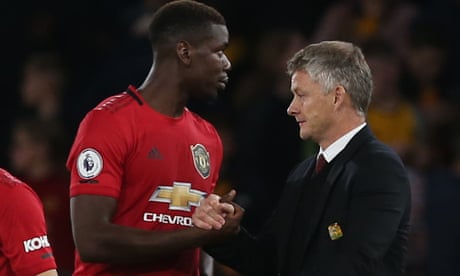 Pogba had racist tweets directed at him, becoming the third footballer in seven days to be abused in this manner for missing a penalty.

A club statement said: “Everyone at Manchester United is disgusted by the racial abuse aimed at Paul Pogba last night and we utterly condemn it. The individuals who expressed these views do not represent the values of our great club and it is encouraging to see the vast majority of our fans condemn this on social media also.

“Manchester United has zero tolerance of any form of racism or discrimination and a long-standing commitment to campaigning against it through our #AllRedAllEqual initiative. We will work to identify the few involved in these incidents and take the strongest course of action available to us. We also encourage social media companies to take action in these cases.”

Harry Maguire echoed those sentiments, tweeting: “Disgusting. Social media need to do something about it…Every account that is opened should be verified by a passport/driving licence. Stop these pathetic trolls making numerous accounts to abuse people. @Twitter @instagram”

Rashford was a second United player to offer a similar opinion on Twitter. “Enough now, this needs to stop @Twitter. Manchester United is a family. @paulpogba is a huge part of that family. You attack him you attack us all…”

On Sunday Reading’s striker Yakou Méïté was a target for racism following a 3-0 win over Cardiff City. This moved the striker to post a screenshot of the abuse, writing: “I don’t think I need to speak.” Alongside a picture of Méïté celebrating, his club tweeted: “We won’t give oxygen to racist comments sent to this man via social media this afternoon. Instead, we will let a picture tell a thousand words – ‘We’ve got Meite… Yakou Meite…’”

This followed Tammy Abraham being abused in similar fashion after the Chelsea centre-forward missed the decisive penalty in the Uefa Super Cup final shootout against Liverpool.

Frank Lampard, Abraham’s manager, stated social media companies should do more to stop the abuse, a stance supported by Kick It Out, the equality and inclusion body.

In the EFL, Stoke City’s James McClean, Southend United’s Theo Robinson, Bambo Diaby of Barnsley and the sister of the Fulham defender Cyrus Christie were targets of abuse based on discrimination.

Kick it Out said on Tuesday: “The latest round of fixtures have again seen unwarranted and vile racist abuse sent to players. This time, Reading’s Yakou Méïté and Manchester United’s Paul Pogba. The number of posts such as these since the start of the season further highlights how discriminatory abuse online is out of control.

“Without immediate and the strongest possible action these cowardly acts will continue to grow. As always, we have contacted the respective clubs to offer support to those affected.”

A July study from Kick It Out indicated that reports of racist abuse increased last season by 43% – with 274 cases compared with 192 the previous season.

Twitter says it “takes action against behaviour that targets individuals with hateful conduct”.