In 2013, Nameere threw in the towel at NTV where she had been hosting the Life Stories show for almost two years claiming that her then manager at the station made it impossible for her to work there.

She later took another shot at TV when she joined Urban TV taking the same idea of the show she had had before.

The new show was called “Life and People” and it aired every Sunday evening. It, however, did not last a year. She then made her way to Bukedde TV, a station hinged on local dialect Luganda, under the same media house. Here, she hosted a show dubbed “Minibuzz”, alongside comedian Dickson Zzizinga. This lasted for about three months.

After she had left Bukedde TV, Nameere got a gig at UBC TV to host Life Stories but quit after a short time and joined Salt TV where signed a 6millions a month salary contract but tendered in her resignation after few months before returning to UBC.

Nameere who is a daughter to Agriculture Minister, Vincent Bamulangaki Ssempijja also had a deal with NBS TV but failed to work out. On 11th of July 2019, Justine Nameere was sent to Luzira prison for six months after failing to pay a Shs55 million debt to businessman Emmanuel Muwonge. 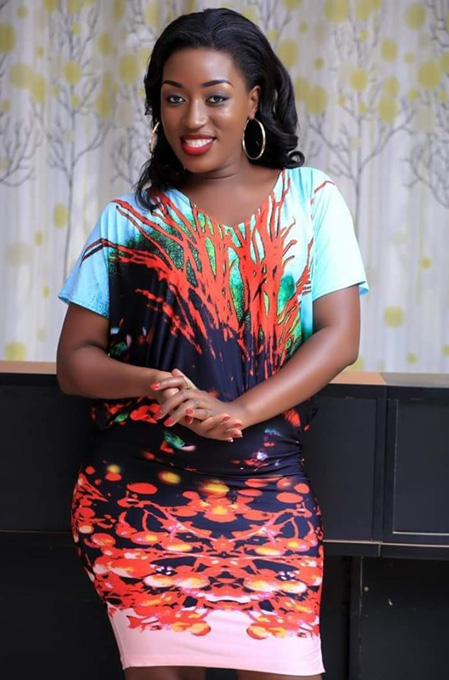 According to Nameere, she did not leave NTV due to poor pay but rather because of mistreatment. She says her happiness at NTV ended with the Kenyan management. She also revealed that she has decided to give herself time from TV to contest for Central Region Youth MP.

First of all, me I did not leave NTV because of poor pay, I le NTV because of mistreatment! My happiness at the station ended with the Kenyan management! My fellow Ugandan, my department head then, made me shed enough tears! I did a powerful fully sponsored show! Unlike many typical presenters, I was my own producer, researcher, etc and yet I still participated in building other shows and talent scouting, etc! Although my contract said just presenter. I didn’t mind bse I love hard work and learning and besides me I was so passionate about my work, am talking about a rare passion! I gave my all naye munna Uganda munange showed me fire! You could not believe I was the same Justine that had been nominated employee of the year by the Kenyan management that had just le! It was not any other manager or work mate but my immediate supervisor/ dept head! I WAS OKAY WITH MY SALARY, BESIDES MY SALARY AT NTV WAS INCREASED FOUR TIMES IN TWO YEARS! On top of that I got bonuses every time I made it to in-house wall of fame, got awards, etc! (Kenyans are charming managers )! Yet ironically I NEVER ONCE ASKED FOR A SALARY INCREMENT OR BONUS OR AWARDS, ALL I DID WAS WORK! So bambi my painful departure was not about money but about just one person! I can even work for very little money, while hopeful BUT I CANNOT TOLERATE MISTREATMENT! Not at a work place, not in a relationship, not in a friendship, not anywhere! I know some cheap talkers have always made it seem like I le NTV and attacked NTV the brand nope! I spoke out against ill treatment and sabotage from an individual! If anything, even as I spoke out, then, I clearly thanked NTV for the opportunity! The person I complained about, was not the entire NTV

duh and neither was she His Highness The Agha Khan, the owner of NTV! Besides I had kept reasons for my departure to myself and told the public I wanted to concentrate on my studies but she took it a notch higher and incited/ mobilized bloggers & tabloids to report that I was fired and to tell so many nasty lies about me! That is when I was forced to expose her! Well she later was fired by the same NTV where she had tortured me and many others from! But anyway good news is me and that person later made up through a mutual former colleague at NTV. We are friends now! Genuine good friends! #Forgiveness. I was much younger then, first year/ 2nd year campus, but one thing still remains constant

– I CANNOT TAKE MISTREATMENT AT A JOB EVEN IF IT PAYS ME 100 million a month! I sometimes see fake news mbu Nameere was fired here and there, u wish! The last employment contract I ever had in my life was the NTV one! I went to Bukedde on invitation from the Vision Group CEO Mr Robert Kabyshenga himself, they offered me a very good pay but to their shock I insisted “let me provide content!” I film my shows, bring a sponsor on board then we share! Of course I take the bigger share because I do the filming and also securing sponsorship deals! Although it takes hard work, God helped me, I honestly never have much trouble securing sponsors! That kind of contract gave me the freedom to do my other stu and deal with any other TV! For example I produced the 2016 Miss Uganda reality show for BBS TV while working with Bukedde TV. Right now I have been providing content for UBC TV while working on a project for NBS TV! And still, even for UBC TV, the line Cabinet Minister invited me to be part of the revamp of UBC TV, oering me a very good contract but I insisted “let me provide content”! So now that a discussion about pay is on, allow me to inform you that one of the ways TV presenters and producers can earn better in the industry is; consider this content provider arrangement! The only problem is yo half baked reporters and bloggers will see you work with dierent TVs and tell the public “she was fired from here now she is here!” You journalists and bloggers get educated about content providers! Nway back to the solution I was presenting; notice that what a content provider makes in one season, a presenter in direct employment might only make in a year or two And besides that, a content provider also owns the copyright of the content so you can sell it elsewhere any time! AZAM pay TV, Dstv’s Pearl Magic are buying local content and some of us are selling and getting some money from content we already earned from and we still reserve the right to sell it else where and earn from it again and again! We can legally use it on our YOUTUBE channels and get more money! Netflix is going to start buying content le, right & centre!

Sheila made a point and has pushed the public to confront a grim reality to do with wages, maybe her packaging is a concern but regarding the point to pick from her outcry, I suggest we address the issue from a place of the entire TV industry, not just NTV, because in the entire region the Ugandan TV industry is the least paying, a factor beyond just NTV! But as is, for those who would like to make much more or a little bit more, think about other options like commercial revenue share contracts! The only time I ever again considered an employment contract by another TV station, was with Salt TV! They were paying me 6 million Ug shs a month but unfortunately my aggressiveness is beyond too much! (Those who know me will tell you how crazy aggressive I am with the hustle!) I could not do just one job whole day whole month! I realized my other bu side hustles were failing and I was losing more money than the 6million that seemed so juicy but in reality the conditions were full time and highly limiting! To the shock of Salt TV and many who knew about my pay, I resigned! My resignation was accepted in peace (evidence in pics ) But as usual yo fake news champions reported “Nameere fired from Salt TV” I have a project with NBS TV, we signed our agreement sometime back and we were waiting on conclusion from the sponsor who gave me a yes recently but unfortunately this covid thing came up so we hope to kick o asap! The project is interesting but only about a season long! Trust me at the end of the project, when they no longer see me on air, yo so called reporters and bloggers will report “Nameere fired from NBS”! I recently wrote to UBC to allow me take a break from content providing to concentrate on my Central Region Youth MP campaigns, am sure they will soon report “Nameere was fired from UBC”! so apart from that disadvantage of misconception by some pple, presenters could consider being content providers! Anyway, lastly, for the typical journalists and presenters, just be united! Form groups, associations and have a united voice to advocate for anything from your employers! Be mature and civil in your approach being mindful that business owners suered to build their empires! Most business owners went through sweat, blood, tears, losses, prison, death traps, hell and back to build the entities that employ you so advocate for better conditions but find a tactical smart way to do it. BUT most importantly do not snake each other! Agree on something and push for it together to avoid individual out bursts and anarchism! And not just your bosses but also Government! Besides salaries, you have your human rights to fight for, you are always getting beaten, decry it as a united front! _For now back to my political gymnastics_