The Police Advisory Committee has recommended Inspector of Police Joshua Cheptegei who broke four World Records in long distance running competitions, for promotion to his next rank of Assistant Superintendent of Police.

The Inspector General of Police Okoth Ochola has tasked the Director of Logistics and Engineering to allocate a Double Cabin Pick-up and a Coaster mini-bus to the Police Athletics team to support their training in Kapchorwa in fulfillment of his earlier pledge.

Joshua Cheptegei has of recent broken four records, he is now the 5000 World record holder, a double Common Wealth Gold medalist and is also the reigning World Cross Country and World Champion. 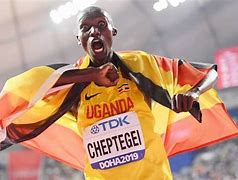 Police also says that there are plans to rename a facility at the Police Training Centre in Kapchorwa and at the Police training school at Kabalye, Masindi in honor of his achievement.

The record breaking Inspector of Police Joshua Cheptegei now has his eyes set on the Olympics 2021, where he aims to beat the Olympics Records for the 5000m and 10000m.

We Talk About Life, The Virus, Everything, But Very Little About Football’: Luis Suarez Opens Up On Friendship With Lionel Messi Having Become La Liga Rivals After Feeling Sad And Hurt By Barcelona Exit