After falling out with management, Black Magic Records, John Blaq lost control of his social media platforms and decided to open up new ones but it seems he is not ready to start over again.

Because of this, John Blaq through a letter sent to his former managers has given them an ultimatum of two days to submit logins to his accounts.

However, when his management was contacted, a one Norman Kitti, one of his managers said, “That will depend on the lawyers ts just a matter of respect n case he needs back his handles…As long as he’s calm we shall give him his handles.”

Take a look at the letter. 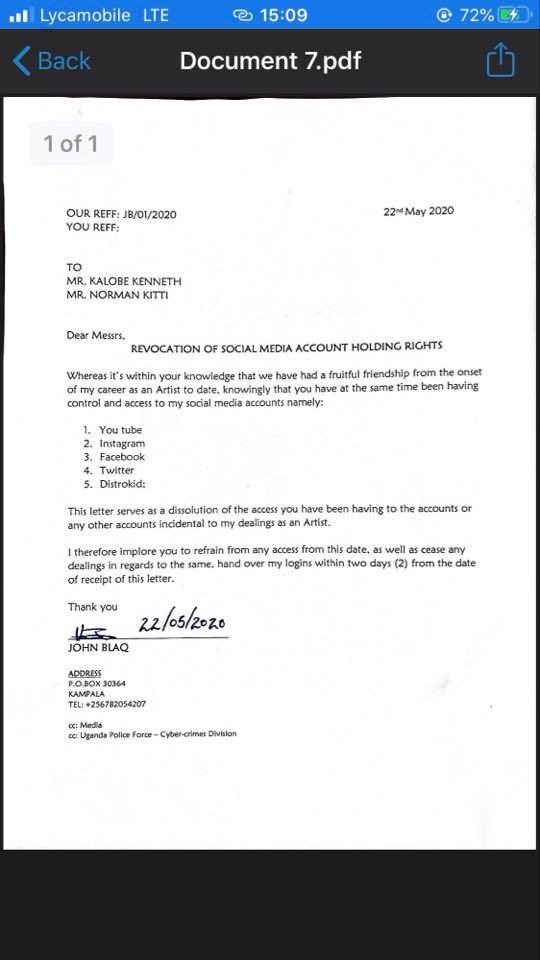 EXCLUSIVE PICS: Here is the babe that serves John Blaq bowls of beans every night. She is also reported to be behind the fallout between the star and management

EXCLUSIVE: John Blaq in tears after losing access to his social media platforms to his former management

EXCLUSIVE: John Blaq falls out with management over failure to meet his new international standards

John Blaq describes the kind of woman he wants to have for bonks. Description fits Miss World Africa Quiin Abenakyo

PICTORIAL: What you missed as John Blaq, Azaawi, A Pass and Janzi Band thrilled revellers at Roast and Rhyme